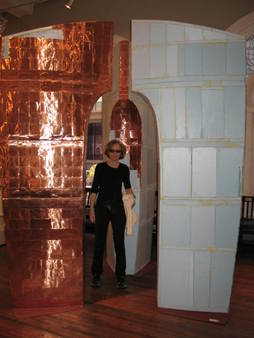 An important part of my process involves discovering the nuances of the inside and the outside of the forms. I work between negative and positive, opposite and complementary spaces. Each element of my monument contributes to the idea of transparency and accessible space.

The figurative and performing arts have an emotional and physical presence. At the same time, audience participation and interaction with such works – theatrical plays or architecture, for example – transform them. A public square is very different at night than at a busy lunch hour. Actors performing among the spectators are not the same when they perform onstage.

The open design of my tridimensional works recalls the structure of ancient ruins, such as temples or a early basilicas. I design the sculpture to interact with the environment and to invite people to walk in, which in turn changes how it is seen. Visitors become part of the structure itself and play a part in the sculptural event.